At the Gathering of the Knights of Thorn, Erwin asked me if I wanted to join the league of extraordinairy gentlemen who were invited to the Dwarven Warriors Tournament. It took me about 0.0002 seconds to say yes! I’ve heard about his tournament, and boy did I love the concept!

Alpha40 is awesome, but can be broken as hell. The idea of adding Beta cards in the mix, having a proper restricted list (the Swedish one in this case) and just use the current wording and rules of the game, is what I love! Allowing Beta gives a lot of people more options, having a restricted list keeps things fun and simplifying the rules leaves less room for interptetation.

But what to build? The format has some really powerful removal in White and Red and blue has the Power ...

I had a few options:

The first deck really seemed like fun, but it lacked some raw power in my opinion.

The second deck looked like a real winner. Having access to the blue Powercards, Counterspells, Burn, one of the best removal spells (Nevinyrral’s Disk) and a huge beatstick in the form of Shivan Dragon, seemed te be my best bet.

The third deck was iffy. Having only 1 Tutor, 1 Time Vault and only a few ways to make Time Vault work (4 Twiddle, a Regrowth and a Timetwister), made it realy hard to assemble the combo. But wouldn’t it be awesome to play a combodeck with only Alpha and Beta cards?

So I started working on the UR CounterBurnTrollDisco deck and it just felt awesome and powerfull!

Then something amazing happened; Time Vault got unrestricted and Erwin announced that the tournament would be using the London Mulligan rule. Again this took me about 0.0002 seconds to switch decks and began building a full combo deck. Even if it would be hard to assemble a 3-card combo (Time Vault, Animate Artifact and Instill Energy), I took the challenge. If I would be able to assemble the combo only once that day, my tournament would be complete!

After a few itterations, this is the deck i brought to battle: 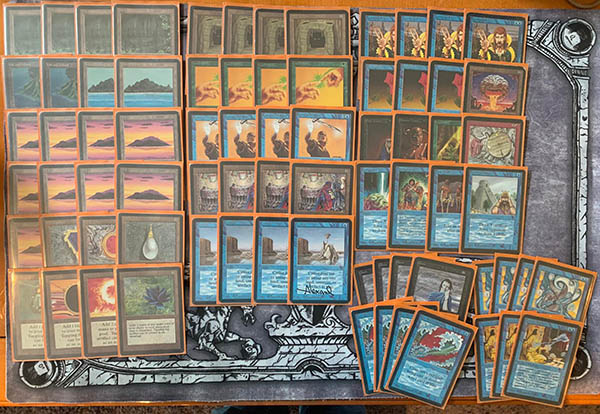 The combo is very weak to about every removalcard out there, except Terror, since Time Vault+Animate Artifact makes Time Vault an Artifact and a Creature. Therefore I added the Counterspells and Mana Short. They could buy me time, counter relevant removal or tap out my opponent once i was ready to combo.

So the tournament began on a very, very hot Sunday.

I won’t go through all the details, but here is a rough reoprt:

Round 1 was against Charlie from Chicago. A most amazing guy with a cool, fully powered burn deck. In game 2 I did manage to assemble my combo and my day was complete! I lost 1-2, but that didn’t matter!

Round 2 I got to play the Legendary Jason, who was on RG beats with Grizzly Bears! Luckily for me, his deck was not superfast, so it gave me enough time to assemble my combo in both games, and i won 2-0.

Round 3 Mari was my opponent. I’ve never played Mari before, and was quite happy to be able to do that now. Turns out that having Icy Manipulator to tap my Howling Mines and making me discard cards with Hypnotic Specter and Disrupting Scepter makes it impossible for me to assemble a 3-card combo. I lost in some intense games (Mari was afraid I was playing Stasis, and being a very good player, every turn he played, he kept in mind that a Stasis could hit the table) 0-2.

The last Round I was paired against Robbie, who was on White Weenie. Having access to Disenchant and Swords to Plowshares scared the hell out of me. Luckily I did manage to win this one in 3 games 2-1.

So an overall record of 2-2 in the Swiss I was amazed at how lethal a combo deck can be in this format!

After the Swiss I played some games against Richard, but Mono Black has no answers to Artifacts, so those games were very lopsided. In the end I played another few games against Nick on RG and also won those games, so in the end I had a 4-2 record with the deck, who would have thought?

My conclusions of that day are:

Erwin, again, thank you for the great day! This format rocks (although I would make 1 small change, make it possible to play more than 4 Plague Rats) and would love to compete next year!