Players of Power and duals of yore have already taken some punishment in the form of Primal Order and Goblin Tinkerer. This critter takes it even further. At 1R and 1/2, it comes with the same cost and body of Atog, but instead of an unsatisfiable taste for its owners’ artifacts, it wastes opponents’ lands of at the expense of a stone rain.

Atog is to Shivan what Dwarven Miner is to Demonic Hordes: the one-card lockpiece: let all land be crumbled and put them on a 20 turn clock afterwards. What’s not to like? 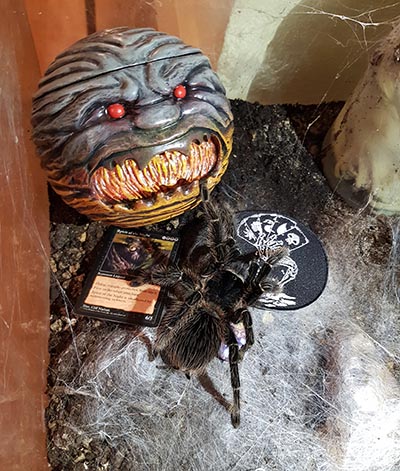 I’ve only seen minor cannon fodder been unveiled (sorry, Eron). Until now that is. Now here’s one that makes my heart beat faster. A humongous, monstrous flyer never hurt anyone!

When Wilfred and I started with the 4th edition, Wilfred had a strong preference for white while I had that for black. We’d therefore predominantly play white versus black decks.

When Mirage came out a year later, Wilfred was there like no other and discovered a big black motherfocker. That night, I took on his first black deck, not yet knowing what cards were in that new set. Halfway through the first game, Wilfred threw a creature on the table and shouted as fanatically as possible: 6/5 Flying, trample, protection from black, first strike when attacking, unaffected by summoning sickness !!!!!! The first 5 minutes I could not recover from laughter, whahaha...... What a nut! This has always haunted him a little hahaha ..... So guess what I’ll be playing at nOObcon 12.